The MUD is THE OG of the MMO world. [Created by two University of Essex attendees]https://en.wikipedia.org/wiki/MUD1) it defined the very idea of an online multiplayer game. One would think, that in a world where this concept has evolved into a billion dollar industry with titans such as World of Warcraft, EVE Online, and Elder Scrolls Online, the age of the MUD is long passed. Nothing could be further from the truth.

MUDs still hold strong as a niche game, and most avid players would rather play a MUD than any modern MMO. Many feel there is a richness that the imagination can provide with text based online games that you don’t get with the “big box” products.

I am one of those. While I am not one who has played MUDs since the dawn of the computer, I was interoduced to the style of game in the early ninties and it still remains one of my favorite game generas over nerly thirty years later.

If you want to build your own MUD NOW then it doesn’t make sense to create your own engine. With many amazing modern frameworks to choose from, (Ranvier, Evennia, or ExVenture to name a few). Most actively managed and developed by the excellent Mud Coders Guild.

For me creating a MUD doesn’t scratch the itch. Instead it is creating the framework behind it that revs my engine.

There are a few things I want from a MUD engine:

Outside of those three points, I will probably pull concepts and ideas from some of these other awesome frameworks, and pull upon my own experiences working in the AAA game industry on flagship MMO projects. 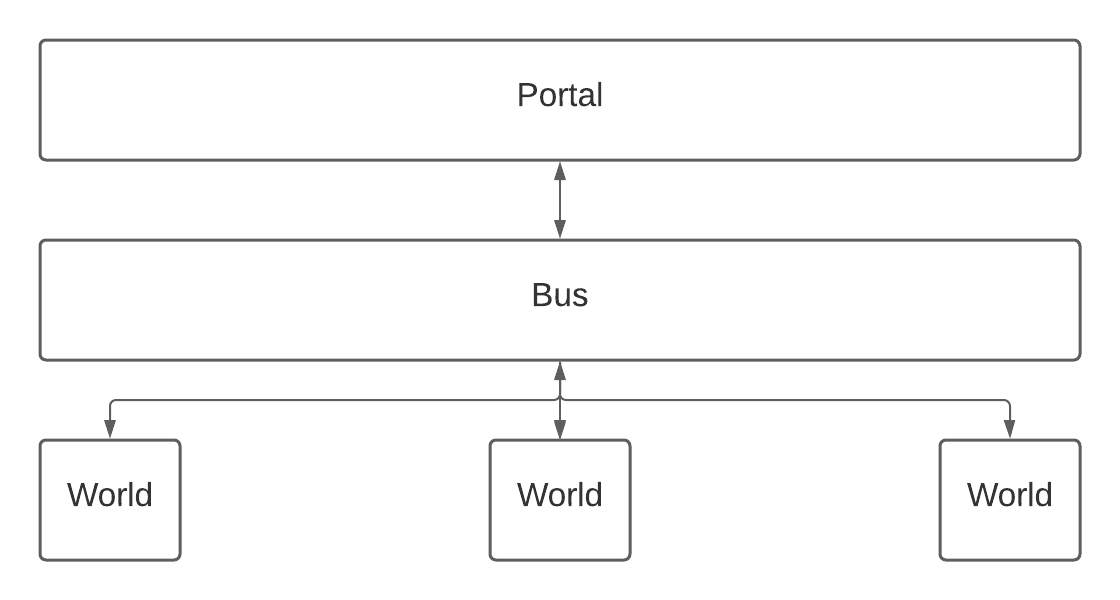 Keep in mind this is a very high level view of what I have in mind, but it suffices for this article’s sake.

The Portal will be the primary point for Telnet clients to connect to the game. It shouldn’t do much more than that. Ideally any socket server that speaks on the same bus should suffice for a portal, regardless of the language it is written in.

The Bus is a messaging system that will be used to facilitate communication between the Portal and the World instances. I’m not going to go into the choice of on what I will use for this layer just yet.

The World represents the game itself. In fact, it can be multiple worlds. A game may have 1 or 50 world instances all running at once. This allows for some pretty interesting flexibility in the future. Maybe creating (instance dungeons)[https://en.wikipedia.org/wiki/Instance_dungeon] for example.

That’s it for today! For now we have a high level concept that lives only in my mind. In the next of what I hope to be a series of articles we will tackle the intracacies of creating such a framework. I want these articles to be relatively short and consumable. Stay tuned!